[tweetmeme source=”nettiewriter” http://www.URL.com%5D
I signed up for the A to Z Blog challenge, then changed my mind and thought I wouldn’t do it. I thought that people would be bored of me driveling on every day for a month. Then I thought again and came up with the idea of a theme. What do I like apart from writing, reading and photography?

So, please join me for a month of film related posts.

A is for Another Earth 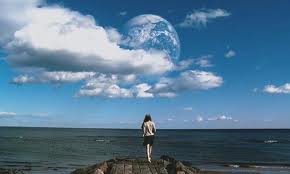 I’m starting with this film as I saw it at the weekend and it’s still in my mind.

On the day a new planet is discovered, Rhoda goes out to celebrate being accepted by MIT. She drinks, she drinks a lot and drives home inebriated. On the way she is distracted by the new planet, this ‘other earth’ in the night sky. She looks up at the misty blue dot and doesn’t see the intersection or the car containing a man, his wife and his young son. Predictably, she crashes into the other vehicle, killing the woman and child outright.

Four years later she gets out of jail and takes a job as a janitor at her old high school. The other earth is very close to our planet now and visible in the daytime too. One day she goes to visit the scene of the accident and sees a man lay a toy robot at the spot. It is the man who was in the car, John Burroughs, a composer who has never recovered fully physically or mentally from the tragedy of four years before. Rhoda uses the internet to find out where he lives and soon has a job as his cleaner too.

What follows is a slow-burn character study of how the tragedy effected both main characters and how each is dealing with it. You would think that the new planet would feature highly in the film, but it takes second place to the story of the damaged souls trying to come to terms with their past.

The other earth is a metaphor for second chances, for ‘what ifs’: what if Rhoda didn’t drink? What if she never got behind the wheel of her car that night?

There are some anomalies in the film. If a body the size of our planet was as close to us as this new earth was, it would surely have an effect on the tides, satellite communications, the speed at which we revolve… all the likely physical effects were ignored. There is a televised ‘first contact’ where the director of Seti was the first person to talk to the ‘aliens’. That would never be televised and surely the military would get i there first?

But these are small points. Another Earth is a melancholic essay on love, loss and second chances and I loved it.

You’ll like this if you liked Solaris or Melancholia.

8 thoughts on “A is for Another Earth”