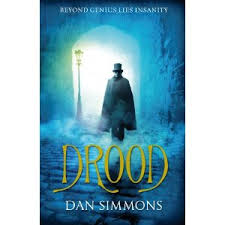 The narrator of this epic tale (nearly 800 pages) is William Wilkie Collins, author of the Woman In White and friend of Charles Dickens.  When Dickens, his young mistress and her mother survive the Staplehurst Rail Disaster, he tells his friend about the atrocities he saw and how he tried to help. He also tells Collins about a man he sees there who appeared to be going around, hastening the injured to their death. He describes this man as being tall and thin, essentially bald with small, sharp teeth and a nose that was but two slits in his face. On closer examination the figure had no eyelids – they appeared to have been cut off – and had two fingers missing. In a quiet, sibilant voice the man introduced himself to Dickens as Drood. And it is Wilkie Collins’ and Dickens’ fascination with this character that permeates the rest of the book.

But you’d be mistaken for thinking the book was actually about Drood.

The book is about a friendship that deteriorates because of jealousy and pettiness; it is about rich men’s flirtation with the lower and dangerous classes; it is about the paranoia and hallucinations Collins experiences as a result of his increasing dependence on first laudanum, and then smoked pure opium to alleviate his ‘rheumatic gout’ (or syphilis, caught from one of his ‘periwinkles’); it is about mesmerism, writing, novels, debt, mistresses, Victorian society, doppelgangers, murder, pride and getting old. And through all of this Drood makes his presence felt even though he appears in person very seldom.

I read mainly at night and during the day I would find myself thinking about the book and yearning to go back into the world it created, much like Wilkie Collins found himself fixating on his next visit to Lazaree’s opium den. I loved the world Simmons created and found his formal, Victorian English easy to understand and evocative of the era without going overboard and becoming a pastiche. The character of Collins changes throughout the story, going from affable to cold and heartless and the twist before the coda of Wilkie’s old age surprised me. Is it believable? Probably not, but it was acceptable within the suspended belief the book creates.

I finished the book a few days ago and I miss it. I miss my nightly excursions into Simmons’ London in the company of Collins and Dickens and still find myself thinking about Drood and his world. And if that doesn’t tell you how highly I’d recommend it, I don’t know what would.

5 thoughts on “Drood by Dan Simmons”