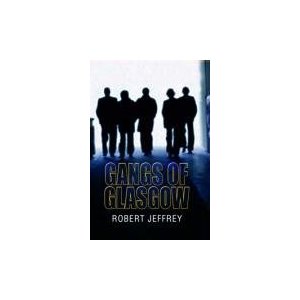 Robert Jeffries writes, “research conducted by Glasgow University’s Professor Neil McKeganey shows that one in three boys and one in twelve girls across Scotland has carried a knife at some time.” A chilling figure.
I am Glaswegian and come from Easterhouse, one of the areas badly troubled by gangs in the seventies and can report first hand how bad gang warfare was. Avoiding contact with these gangs was an everyday pre-occupation throughout much of my childhood. There were running battles between rival gangs where knives, swords, bricks and chains were the weapons of choice.
Jeffries book is a well researched non-sensationalist historical account of the Glasgow gang problems over the past 100+ years. He looks at the various methods tried to eradicate the gangs, their changing motivations and the emergence of the ‘Glasgow Godfathers’. There is a chapter on the names of the various gangs and I was shocked to be reminded that there were three seperate gangs in my small scheme that contained only 4 streets.
I’ll finish this by saying that Glasgow is not a violent city first and foremost now. Whereas previously Gangs ran in the open and many innocent bystanders were sucked into the violence, nowadays the gangs are concentrated around organised crime and a normal citizen is unlikely to ever have any dealings with them. Not knowingly, anyway. But if you live in a good area, some of the people shopping at the supermarket could be involved in the gangs of the 21st century.
It’s this way in every big city, and Glasgow is no different.

4 thoughts on “Gangs of Glasgow”