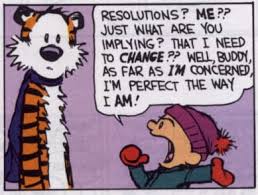 As 2010 ends our attention starts to shift to the year ahead. We look back on all that happened during the previous twelve months and start to formulate our hopes and dreams for the next year before us. Invariably, this ends up in a few tears and some well-intentioned New Year’s Resolutions.

I don’t believe in making resolutions. They are always of the eat less, write more variety and I end up feeling a failure by the 5th of January when I close the laptop in favour of watching Castle while eating a big bar of chocolate. So this year I’m doing something different: I’m making up resolutions for other people instead.

Coalition Government: you will cease to exist. You will realise the futility of trying to keep together two parties with such different opinions on how the country should be run and resign, giving the country another chance to make its mind up about what is really important.

Iceland TV Adverts: in 2011 you will stop getting C-list celebrities to pretend to find your sub-standard tosh is delicious while having a good old knees up. Instead, you will show your food being ‘enjoyed’ by normal people in print adverts only. You just can’t do a good TV advert.

Jackpot Joy: All Bingo advertising will be illegal. I think we know why.

Bad Drivers: You will stop driving like Jenson Button on the country roads of NE Scotland. You are not Jenson. You should know this because he doesn’t drive a white van.

TV Soaps: Every storyline this year will be upbeat and positive; there will be no fires, accidents, murders or affairs. Use your imaginations, for once.

Twitter Bots: All twitter bots will have their accounts deleted immediately 3 people report them. Also, there will be no automated DMs from people trying to flog stuff. It’s just annoying.

Funding for Literacy: The government will increase funding for libraries, open more and for longer hours, initiate a reward scheme for frequent users, continue teaching creative writing throughout secondary school education (it seems to stop when kids leave primary school) and will have a government publishing arm to encourage new writers by giving them a published platform. And just to show I’m not biased, they can do the same for art. Both of these are important to our cultural wellbeing.

Sarah Palin: sell your guns and buy an atlas.

As this will probably be my last blog post of 2010, may I wish you all a peaceful Christmastime. Keep warm, keep safe and I’ll see you all next year.