I am a mother. No, not that kind of mother. The nurturing and caring kind. I always have been, even before I had a baby of my own.

When my other half and I moved in together we thought the patter of little feet would complete our domestic bliss and after one quick trip to the Cat and Dog Home, we became the parents of two tiny, flea infested kittens. We named them Cleo and Darcey and I loved them. They were my babies and I was their fiercely protective mama. They slept on our bed, ate from my plate – yes, I know that’s disgusting to some of you – and I bought them crab sticks every time I went to the supermarket. I was besotted with my kitties and they were ambivalent to me. If you own a cat, you’ll recognise where the balance of power lies in the relationship.

When we moved from a flat to a house with a garden I looked on proudly as they took their first tentative steps into the great outdoors, dealt with the presents they brought home and pulled sticks out their arse when they misjudged a leap. OK, that last bit only happened once, but still…

So it was that when local kids started setting fires in the woods opposite our house I would worry myself sick until the girls came home, smelling of smoke and with a glint of adventures spent in their eyes.

One evening I got the munchies. I wanted a sweetie and had none in the house. Given that this was in the time before 24 hour supermarket opening, the only place selling chocolate was the local service station, about two miles away. I went to the door to call in the cats – I hated leaving them out when I wasn’t home. My ‘here kitties’ and ‘puss puss’ fell on deaf ears and despite my best efforts we had to leave the cats outside while we nipped up the road in the car. I could smell the fire in the woods but I am ashamed to say that my chocolate urge won the day.

We got to the petrol station, parked and went into the shop to choose our tuck. At the counter I saw a young policeman, chatting to the cashier. Ideal, I thought. I can report the arsonists while I’m here.

I went up to the policeman. “Excuse, me,” I said, “I’d like to report some vandalism in the woods.”

The policeman turned to look at me. “I’m afraid I can’t help you, he said, and turned back to the cashier.

Cheeky young sod, I thought, and scruffy too. Not the standard you expect from an officer of the law. Up close I could see that he needed a haircut and his uniform was less than pristine.

“Yes, you can help me,” I said. “There are youngsters setting fires in the woods and it’s not safe.”

“I don’t understand!” I interrupted. “I think it’s YOU who doesn’t understand.” My maternal instinct kicked in and I was going to get this young excuse for a policeman to do his duty, stop the fires and save my childr…erm, cats, if it was the last thing I did. “I have two kitties out there and they could be being tortured by these hooligans as we speak. Have you any idea about what’s going on in those woods?”

“Madame,” said the cop raising his voice,” I’m afraid it’s you who doesn’t understand. I’m not a policeman.”

“Not a policeman? But…but…” I stammered, pointing to his handcuffs.

“No,” he said. “I’m a strippogram.” He ripped open his trousers to make his point while the cashier and my husband laughed themselves silly. I’d say I didn’t know where to look, but…

My face was hotter than the fires in the wood, but I still managed to buy some chocolate before skulking to the car. And the moral of the story? Never, ever trust a man in uniform until you see his truncheon! 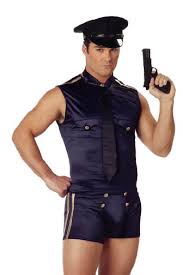